Got to LOVE sailing on land. "here comes a tree- do I go above or below this tree?"

Email ThisBlogThis!Share to TwitterShare to FacebookShare to Pinterest
Labels: pictures-wings

This is one of the few places where I really want to be... Dibutil

If you thought that 2010 is over.. Think again! Because Quebec still has winter and ice and wind. Click on the banner to proceed to the event.

Email ThisBlogThis!Share to TwitterShare to FacebookShare to Pinterest
Labels: 2010, matapedia 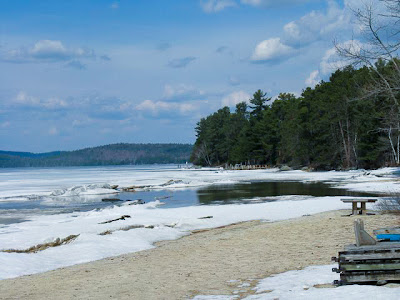 It is a squeeze when ice access is across a pool of slop and open water is all around. Normally this is the best time of the year on Sunapee, but last Saturday was +20°C [or near the accepted "room temperature" of 70 degrees F] air temperature, and of course - the water was.......COLD! 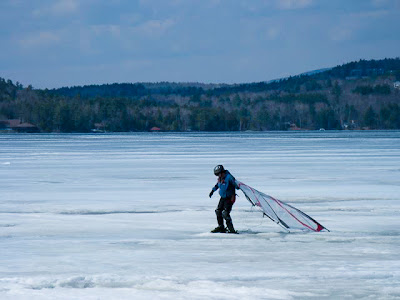 Poor Rick Hobbs of Lunnenberg, MA got his boots soaked early on. He made up for it by staying out on the ice and logging some good distance before coming in to eat and rest. Just the same, he had to dump water out of his boots! 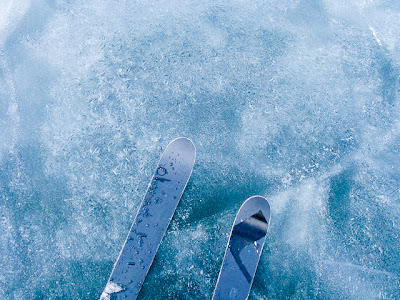 Those are Volkl powder skis- the better to skim OPEN WATER with! Thankfully there wasn't too much of that. 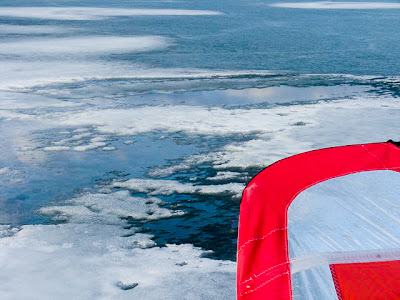 Looks harmless enough - is is NOT! That is a swimming hole. There were a lot of them. At the speeds we were going, it took an eagle eye to miss them. 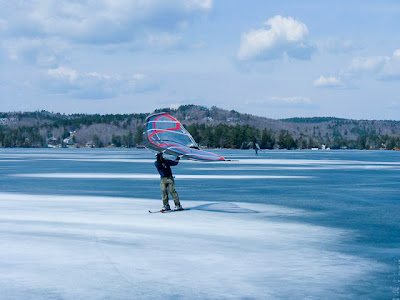 Annie Tuthill [age 15] carried a 5.5m wing ALL day without a harness. This may sound simple, but it was not. The wind was hot, dry and gusty. I was hanging from my lines most of the day. The gray stuff was super soft. If not prepared it could knock you down. Twice I had a ski get ripped off my foot by it. 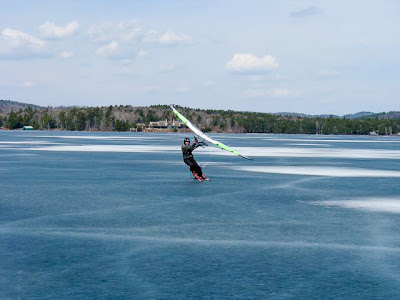 Steve Barrs of Andover, NH is on "solid" ice here. You could really build up speed on these spots. Steve stayed out while many went in to eat and /or drain their boots. He was well over 100 km distance traveled at the end of the day. Also- knowing that the end was near-he was out all day the day before. 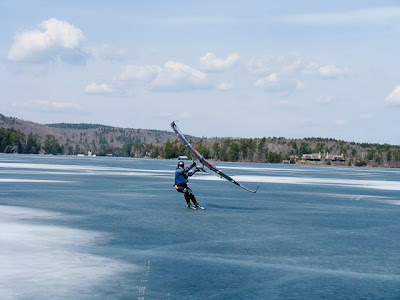 That is Rick making some serious speed. 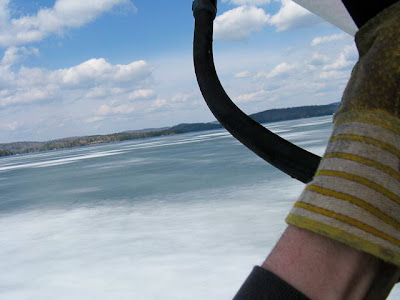 The rider's view. I was riding the 7.5 meter Wave Warrior wing by Kitewing. It has modified battens made by Richard Saltonstall of Rockland, Maine. Richard replaced the stock tips with custom carbon foil sections that he made himself. At WISSA 2010, Rainer and Juho Salo [ Rauma, Finland] together with engineer Klaus Faisst [Toronto ON] made further adjustments. The wing was a heavy handful in this wind. But still easily managed. As hot dry gusts scoured the ice plate the ground effect bounces called for signifigant counter balancing weight- I HAVE IT! I laid my full [ 2 meter tall /100 kilo weight] into this wing and got lifted. [ it was GREAT!] Once while bending off a big air bounce, I skimmed an open hole that would easily swallow a person. Thank goodness [and Kitewing] for lift :-))) 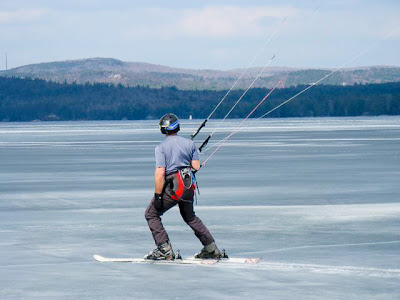 George Baskette of Barre VT was sailing in short sleeves. It was an eire combination of hot weather and dying ice. 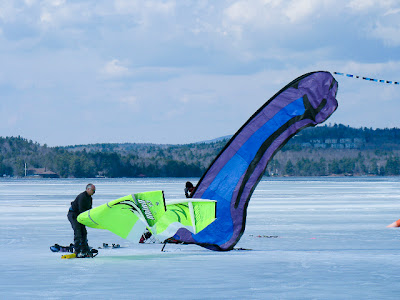 George has a big one - Get it? George has been ice/snow kiting from the beginning. 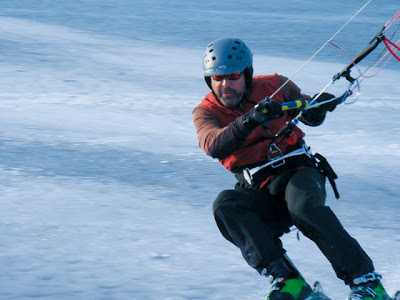 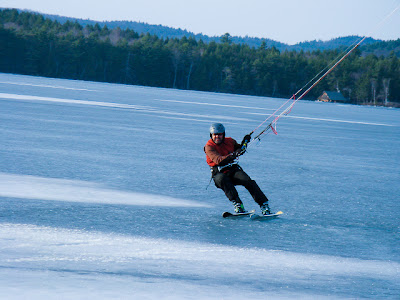 Charlie was hammering ALL day! He topped 100 kph earlier in the season and has logged over 1,600 km distance in previous years. LOOK at the bend in his skis! He is lit! 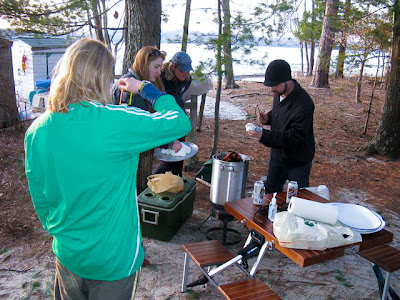 The other regular kiter, Chris Porter of Hanover NH has been working in NYC for the past several weeks. He could challenge anyone for best jumps on Sunapee, but this weekend, Chris & Katie spoiled the troops by deep frying turkey and duck on site. They spent hours preparing and the feast was devoured under automobile head lamps. It was delicious. Huge props to Chris and Katie for their generosity and culinary prowess. 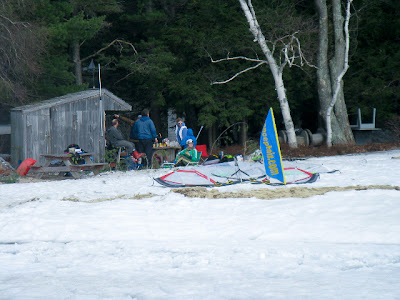 Special thanks to Allison Baskette, Kimberly Tuthill, and Lori Meding for holding down the shorefront on this last of days. It was a long haul and you guys were steadfast." Kikea hyvaa sinyle" as they say in Finland "all the best on you"
Kiitos

Four Guys Fall Through The Ice At Keswick, Ontario

Recent news at TheChickenLoop with some interesting discussion on the publicity of such events for the sport.
No comments:

The beat goes on

Email ThisBlogThis!Share to TwitterShare to FacebookShare to Pinterest
Labels: 2011

The first in a series of images from WISSA 2010:

This is next year's organizer Feodor Gurvits with friend Anna Arosilta sailing at sunset on the very beautiful Lac Saint Jean.
photo by Charles Meding [USA]

Here is a photo by Joho Salo of Rauma, Finland. It shows how some people [namely light weight, strong, and expert teen-aged windsurfers from Poland] can sail in almost no wind. They are on sleds with jumping skis using top quality sails. Now that the maximum sail size for WISSA competition has been raised from 7.5 meters to 9.5 meters, we can go in even LESS wind :-)

Notice that the shore is not visible. That is because Lac saint Jean is so big that you can sail away and lose sight of shore. The snow conditions at WISSA 2010 were perfect. The brief period of light winds during the event were not normal. Regular winds from the west in the 30- 50 kph range came right back as soon as the event was over.

“Ain’t it always the way?” Plan an event and everything will go wrong. Not only were we forced to relocate an event that was two years in the making because of ice conditions that no one had ever encountered before, but, when we did relocate, the wind chose not to blow!

The real action was in the kite class with 19 meter and larger kites. The windsurfing and wing classes did a lot of waiting. We somehow managed to get off five races that were handily won by lightweight teenagers from Poland. Sleds with 250 cm jumping skis and large race sails have a way of gliding in the lightest of breezes.

Winter windsurfing is alive and growing. The irony of the WISSA Ice and Snow Sailing World Championships being the oldest international race in the history of windsurfing is not lost. I thought that windsurfing was a water sport!

Email ThisBlogThis!Share to TwitterShare to FacebookShare to Pinterest
Labels: 2010

SAINT-GÉDÉON, QUEBEC--(Marketwire - March 2, 2010) − The Honourable Denis Lebel, Minister of State for Canada Economic Development, today announced the awarding of $60,958 in non-repayable funding to Zone Turbulence for the 30th edition of the World Ice and Snow Sailing Association's (WISSA) Ice and Snow Sailing World Championship in Saguenay–Lac-Saint-Jean. Granted through the Community Futures program, this financial assistance will serve to help the organization promote the competition on foreign markets.

"Saint-Gédéon can be rightfully proud of playing host to the 30th Ice and Snow Sailing World Championship. This prestigious event—which draws a wide following—is an ideal opportunity to showcase the Saguenay–Lac-Saint-Jean region beyond our borders. This Zone Turbulence project is sure to further the development of winter tourism in the region, which is why Canada Economic Development is pleased to lend its financial support to the event," explained the Minister of State.

Hundreds of spectators and visitors, many of them from outside the province, are expected to attend the competition, generating an increase in winter tourism traffic that will benefit the Saguenay–Lac-Saint-Jean economy as a whole.

Established in April 2009, Zone Turbulence is a non-profit organization that groups together several regional associations active in the wind sports sector. The organization's mission is to promote wind-powered sports. This year marks the first time that the Saguenay–Lac-Saint-Jean region will be hosting the world championship, which runs from February 26 to March 7 in Saint-Gédéon.

Minister of State Lebel wishes the best of luck to all participants of the 30th Ice and Snow Sailing World Championship and is hopeful that the event will be held again in the region. "This competition is a great opportunity for our young ice surfers to take on an exciting new challenge and stretch their limits," he concluded.

Email ThisBlogThis!Share to TwitterShare to FacebookShare to Pinterest
Labels: 2010

Hey, I just found this link...

Do not expect much from the photos because copyright is important.
No comments: