Just wanted to let you know that the WISSA articles in The St. Ignace News are now paywall-free. (We paywall our stories for the first four weeks.)

Email ThisBlogThis!Share to TwitterShare to FacebookShare to Pinterest
Labels: 2012

WISSA Has a Mobile App Now!

Please check out this link from your mobile device: 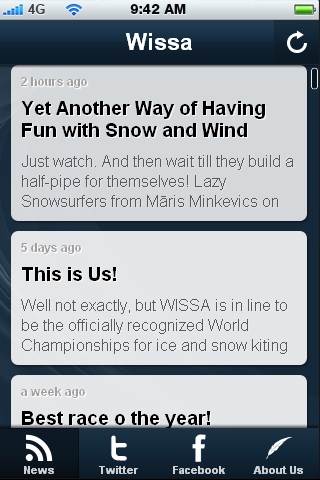 Email ThisBlogThis!Share to TwitterShare to FacebookShare to Pinterest
Labels: mobile

Yet Another Way of Having Fun with Snow and Wind

Just watch. And then wait till they build a half-pipe for themselves!

Well not exactly, but WISSA is in line to be the officially recognized World Championships for ice and snow kiting starting in 2013. Representatives from IKA will be there to confirm that the organizers are capable - and we know that they are! :-)

Who ever heard of Short Track with regards to kiting? (am I missing something?)

In any case, we will see Markus in Kalajoki for WISSA 2013.

Here's to the longest running International Competition in the history of kiting! (windsurfing and wings too!)

Here's to the integration of WISSA and IKA!

WILL KITEBOARDING BE IN THE OLYMPICS?

In May 2011 ISAF Council confirmed there would be a board event at the 2016 Olympic Games. But they weren't sure what type. Both Windsurfing and Kiteboarding remained on the table.

While ISAF was familiar with Windsurfing, they needed more information on how Kiteboarding could be presented. So they scheduled a series of Kiteboarding format trials in Santander, Spain from 21-25 March.

"Eighteen sailors from 10 nations and 4 continents will demonstrate what kiteboarding is capable to do, " said Markus Schwendtner (GER), Executive Secretary of the International Kiteboarding Association. "An ISAF evaluation panel consisting of members of the ISAF windsurfing and kiteboarding committee, events committee and equipment committee will collect all data and present a report to the ISAF mid-year meeting (May 3-6). "

The list of participants read like a who's who of the international kite racing scene: both men's world champions - Johnny Heineken for course racing and Damien Leroy for Slalom - are present as well as women's course racing world champion Steph Bridge. The European Champions Julien Kerneur and Katja Roose are there as well as the freshly crowned Asian Champion Yo Pudla Narapichit.

On the evaluation panel is Bruno de Wannemaeker of the ISAF Equipment Committee, who shares additional insight into the process: "Santander is about testing the Kiteboarding formats and evaluating their suitability to fit as the Olympic 'boards' event in 2016. My understanding, from ISAF Technical Staff, is they are not concerned about selecting equipment, or 'class', as is normally the problem faced with other sailing events.

"In an ideal world, the International Olympic Committee should grant ISAF one or more additional medal(s) for the inclusion of Kiteboarding. But IOC did not do this, and none of the current sailing events want to leave the Olympic scene, so ISAF decided that the windsurfers and kiteboarders would be trialed against each other for the board medals.

"It is the stated objective of ISAF to evaluate formats for all the Olympic events, with a view to changes (improvements) that will make the Olympic Sailing Regatta more relevant in the modern era. Several formats will be tested in Santander such as course race, slalom, boarder-cross, stadium racing, short track, etc.

"We assume that the ISAF Executive will make a submission to the midyear meeting in may 2012 based upon reports they receive from the Santander trials; or delay for further investigation until November. "

There are great facilities there in Kalajoki, really great ones! And the free spa every day was appreciated after the gusty winds....
But check the video of races...

Pond Hockey, WISSA and the winter of 2012

Well, February has passed and all the craziness of gearing up for the winters main events is over… (read on)

Cheryl Schlehuber, Life in the Great Waters Region of Mackinac

Email ThisBlogThis!Share to TwitterShare to FacebookShare to Pinterest
Labels: 2012, link

I have been promoting GPS Icesailing for many years now.

This site and official GPS World Record organization uses very scientific means of gathering and reviewing GPS data to establish both World Record claims and regular rankings for participants all around the globe.
Two sister sites, GPS Kitesailing and GPS Speedsurfing serve the water aspects of these sports with the fastest sailors in the world participating. There are more than 3000 members between the 3 sites, but only 150 for Land&Ice site.

I have been primarily focused on Icesled class (windsurfer sails) and recently achieved a new World Record.
But this is not my main point I wish to make here. I would like to point out that a recent post by a Kitewinger in Sweden has made a significant session post that deserves attention.

Big time congrats to Alex! I hear he is quite good and an official Kitewing team member. This session also places him into the overall Top 10 of the year as #10! Those rankings inlcude all classes of boats, iceboards and kitewings.

Here is a ranking list of all Kitewings to date.

I would like to once again extend my assistance to anyone in Kitewing class who wishes to join this website and post official rankings. I have GPS loaner devices for use which I have been given to help get people more involved. Our Iceboard fleet is well represented in the USA and have dominated the class for speeds again this year.

So, next season please join me with your Kitewing and join the world GPS rankings!


Hello again-the previous post mentions topics I wanted to expand upon. It's too bad that the video doesn't show the race where Annie Tuthill came really close to beating both of the best Swedish racers, Peter Klingvall and Lars Frommell (the one with the big skate sail). The course was a downwind "zig-zag" layout with four marks. Annie somehow took the lead and maintained it until Peter caught her at the last mark and finished first, but she did finish ahead of Lars with his 9.0-meter draksegl. (Not sure of the spelling - it's Swedish for "dragon sail"). In the video on FB, she finishes last. I like this ST format - I hated every minute of the course racing due to the soft sticky snow and spotty winds that made it a light person's race - but in ST I was actually able to pull off a few wins and finish 10th overall. It wasn't enough to catch the really fast guys but I'm pretty happy with it all the same, it being my first time racing in this format. (Side note: The U.S. representative - me - at the 2008 WISSA meeting spoke for and subsequently voted for including this discipline in future events.)

ST is fast-paced - no race lasts more than a few minutes and there is always someone on the course as the next racers head out as soon as the previous ones round the last mark. It rewards quick thinking and the ability to see and exploit opportunities to advance. An opponent may lose control or simply make too wide of a mark rounding and all of a sudden you're back in it. We had up to five racers on the line at once. Usually the upwind end of the line is favored but a good start and a fortuitous puff can erase the disadvantage of being caught behind everyone else's dirty air. This what happened to Annie and also to me where I started at the downwind end but somehow got the jump and won.

It may seem as though racing in such close quarters is risky but the usual ROW rules apply and I never saw more than incidental contact between riders, if at all. In one race Klaus Faisst and I bumped wings a little but it wasn't serious and neither of us protested. Once I got used to it, I felt perfectly comfortable racing with the others. I can't carve on skates like the Swedes do (yet?) but I did hit every jibe.

The ice was cleared and the zamboni was in use but it was also being used to set up the rinks for the youth pond hockey tournament that took place there last weekend. So the ice wasn't absolutely perfect but good enough for the most part.

The tall blades you see in the videos were specifically designed for skate sail/wing sailing and the design has several advantages. The height enables use in up to a few inches of powdery snow, and allows the wing to be held that much higher. You can also generate an extremely sharp angle to the surface while turning without fear of boot/ice contact which would cause loss of edge. If you look at the "Sail 365" website in the Links section, you'll see a page devoted to these skates. They are offered for sail there but we're going to work on making our own for next year. Lars and Peter sail their own custom designs and they carve them with surgical precision. It's quite a thing to watch, I can tell you. I'm a ways from competing at their level but I'm pretty sure that my parking lot sessions with the inlines helped me here. Whether I'll be able to go to Finland next year to try again is another story, but there's no reason some of us couldn't set up a few cones and give it a go some time.

I've been busy try to catch up at work and home after the trip but hopefully I'll be able to obtain more photos and/or video from the event to post here. As well as another few paragraphs... meanwhile I yield the floor back to the group and other ongoing discussions.

Anyone interested in joining me for a possible session on Sunapee this weekend is welcome... I know the weather outlook is not good but I have to go anyway to return Will and Annie's equipment. Meanwhile keep 'em flying!

Email ThisBlogThis!Share to TwitterShare to FacebookShare to Pinterest
Labels: 2012, video

A little gem from the WISSA 1997 Championship 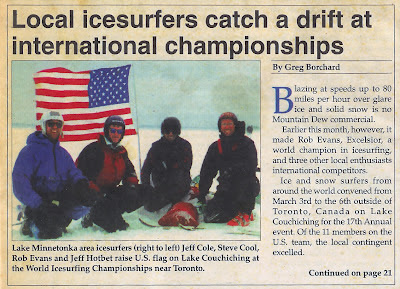 Email ThisBlogThis!Share to TwitterShare to FacebookShare to Pinterest
Labels: 1997, pictures-people


The 2012 WISSA Ice & Snow Sailing World Championships wrapped up last week in St. Ignace Michigan - huge props to the organizers for being agile and flexible.

The Straits of Mackinac – recognized by some sailors as the last stretch of the iconic Chicago-Mackinac Race - are also known as the International Ice Bridge in winter.

Despite getting nearly twenty feet of snow each year, the ice in the straits is generally clear of snow because of constantly howling winds - perfect for a WISSA World Championships! Except that this year for the first time in recorded history, the ice never came.

Racing moved to nearby Chain Lake, which was not big enough for all three classes to race at once.

Kites used the snow covered course whiles sleds and wings ran Short Track Slalom (STS) on a plowed area of ice – again - props to the organizers and volunteers who made this possible! Winds on Chain Lake were a fraction of what was expected, but competitors from Finland, Canada, Sweden, USA, Latvia, France, Russia, Switzerland, Cuba, made the best of it.

Results are found at wissa2012.com/results

The WISSA Ice and Snow Sailing World Championships are the longest running international competitions in the history of windsurfing, kite sailing, and wing sailing - ironic given that at least two of those are perceived as water sports.

Next year’s contest will be in Kalajoki, Finland, and 2014 will be in Quebec.
No comments:

Email ThisBlogThis!Share to TwitterShare to FacebookShare to Pinterest
Labels: 2012, 2013, 2014