Nice operator's work and skiing too!
No comments: 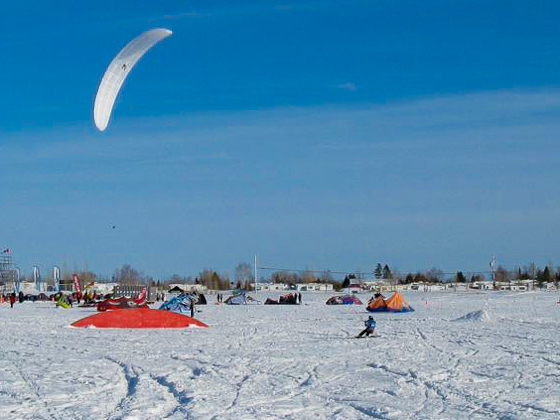 Simon Gill
Simon Gill of Montreal has clenched the title of World Champion in the Kite Class for a second time! In addition, he is also the winner of the Coupe de Quebec - North America's most advanced snow kite racing venue. This is also Gill’s second time winning the prestigious Coupe de Quebec.

What is interesting about this story is that after his win at Val Brilliant, Quebec in 2008, Gill seemed a shoe in to take the title at WISSA 2009 in Riga Latvia - only I knew better.

Call it schadenfreude, but I was certain that the supremely talented Russian kite sailors would give Gill the competition that had been lacking in his previous victories. The cost of overseas travel prevents keeps some of the best sailors out of competition, and that is why WISSA World Championships alternate between Europe and North America each year. I knew that the talented Gill had not been truly tested going into 2009, and for me, it was fun to watch.

I knew that the Russians were good, but even I was surprised at the final race results. Gill came in 10th place behind - all Russians and one Latvian (Gatis Satiks – 6th place). 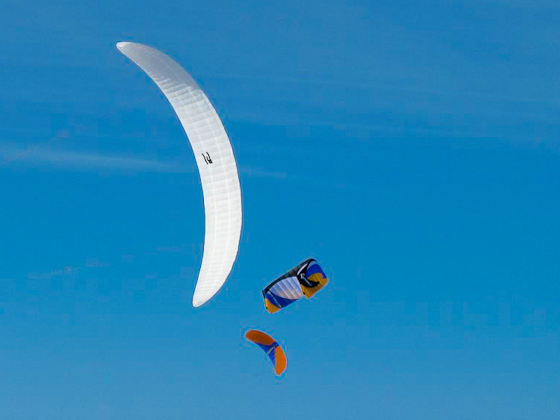 A less evolved competitor would have behaved badly or tried to rest upon previous achievements, but Gill reached out to those who defeated him and forged a friendship with Roman Lyubmitsev of Elf Kites. It turns out that Roman’s mother is French and Roman and Simon Gill shared the French language in common.

A friendship developed, and shortly before WISSA 2010, Simon took possession of an Elf kite.

Had the winds been different, (i.e. stronger!) this kite would likely not have been a factor. As it turned out, the kite was perfect. The unlikely partnership of Russian kite maker and 10th place ex World Champion turned out to be a winning formula!

It just goes to show - you can’t deny talent. I just want to see what will happen next time North America’s best racer - Simon Gill, goes up against the best Russian, and European racers. With luck that - and many other compelling things will happen at WISSA 2011 to be held at Saimaa Gardens in southeaster Finland.

Better late than never, Will.
No comments:

Email ThisBlogThis!Share to TwitterShare to FacebookShare to Pinterest
Labels: 2010, personal

This past Saturday, Marcel Bradette, Jocelyn Marceau, and Langis Caron scored some sweet ice on Lac Jacques Cartier located in the Reserve Faunique de les Laurentides just along the route 175 that connects the Saguenay, Lac Saint Jean region to Quebec City and the outside world. The park (and lake) are about 1.5 hours north of Quebec City. It is the altitude rather than the latitude that makes Lac Jacques Cartier one of eastern North America's most long lasting sailing venues.

All three sailors were at WISSA 2010. It is good to see that they are still sailing when many have stopped because of abnormally warm temperatures. 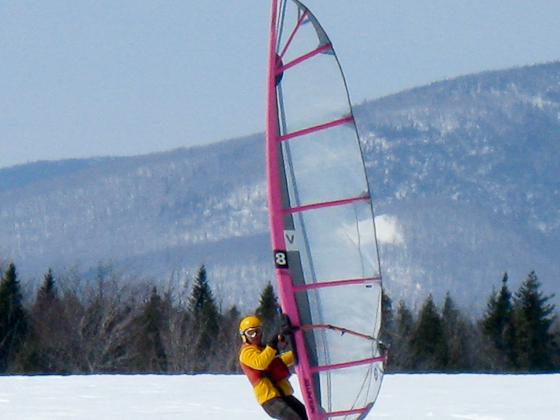 Email ThisBlogThis!Share to TwitterShare to FacebookShare to Pinterest
Labels: pictures-people

Purple Panic is a 10M JoJo with 70 meters of line. EVERY time it comes out - it makes drama!

Charlie Meding shot this on Lake Sunapee in almost NO wind. Still there was drama. He sent the kite north while still skiing south and got ripped several meters off the ice! He landed backwards - grateful to be wearing twintips.

The lines are so long that the kite can get ahead. It is flying in another atmospheric layer. The wind at the surface is almost still, but 229 feet (70 meters) above, it is still windy. You have to be careful - it is easy to get pulled into trouble with this thing.

This kind of kiting is to dream about!

This is 10 year old Nathaniel Montminy of St. Fulgence, Quebec. Lots of people prefer to kite with Snowboards, hence the new rating category for WISSA.
No comments:

As of WISSA 2010 a new category of kite racing is formed.

KITE CLASS Snowboards will now officially be scored in a separate category from skis. The starts will remain the same until snowboard start numbers reach an equal or greater amount.

WISSA is always looking forward, and we want to be the premier destination for racing worldwide. As kite snowboarding gets more and more popular, we want to extend a welcoming hand to any and all who wish to take part in international racing.

Starting with WISSA 2011 snowboards will be rated separately but start together with skis. As snowboard registrations grow, a separate start can and will be arranged.

Just pulled this from a search agent.

ERCIYES in Turkey. from Boulgakow on Vimeo.

A snowkiting session in Erciyes, near Kayseri, in the turkish mountains, with Chasta and the friendly turkish snowkiters.