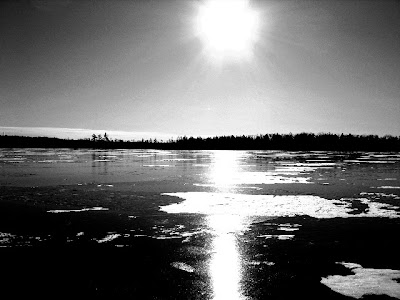 Really nice black ice with a smattering of snow drifts you could easily steer around. Very blustery NW winds too much for big wings today on this unfamiliar ice sheet. Used 3.8 to check out and explore with Jory Squibb. Some obvious open water; mostly ice is around 4 inches thick, plenty strong and starting to crack into the big plates characteristic of thick stable ice.

The 3.8 went pretty well. Saw top speed of 45 mph, but must admit drifts were harder to dodge at top speeds; wind pack enough to make me cautious.

Learned old lesson again walking off the ice in a about an inch of snow next to shore. The ice had frozen and the water had gone from underneath as the lake level receded. The ice was only about an inch and a half thick supported by air! Through I went up to the knees!

No harm done, but renewed respect for the capricious momma whose frozen play ground we enjoy. I fear the currents in shallow Plymouth where the laker level can recede that much under a freeze and realize why there is still open water there.