‘I probably won’t hit you, but just in case . . . ‘ – Photographing snowkiting for a magazine 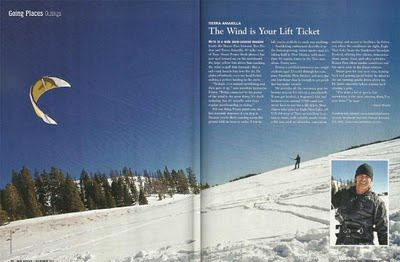 A piece I wrote and photographed for New Mexico Magazine has appeared in the December issue – and getting the shots was a bit more intrepid than the work I normally do.

Back in March, I went up to a snowy field beside the Brazos Pass in northern New Mexico to talk to and photograph Stuart Penny, who teaches snowkiting – a fast-growing and exciting winter sport.

The snow was really deep – one step the crust on top would support you, but the next you’d be post-holing up to your crotch in the white stuff.

Stuart was teaching a class, and I hung out for a while watching him instruct his pupils on how to harness the wind to have them zooming across the the snow.

When the class was over...