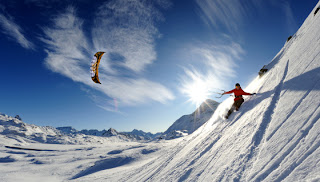 A group of eight athletes are preparing to be the first people on the planet to ever snow kite mountaineer to the top of a 13.000-foot plus peak. Project Ataraxia 2012 involves a two and a half month trip and expedition across Alaska.
The crew will be snow kiting, speed flying, paragliding, ski touring and glacial traversing. The entire challenge will be documented through film and photography. The extreme journey has two huge challenges: the completion of the Eklutna Traverse and the ascent of Mount Marcus Baker.
Both are extreme undertakings, with the traverse representing the horizontal realm, and Mount Marcus Baker the vertical extreme. Historically these expeditions have been undertaken with large carbon footprints and have been accomplished through slow and arduous climbing techniques.
By combining the experience and skills of former snow kiting world champions with the expert knowledge of Alaskan mountain guides, the group will make the impossible become possible and reach the summit without the unnecessary combustion of more than 200 liters of fuel per hour.

Project Ataraxia 2012 is about to kick off. The team is heading to Knik Glacier, where the basecamp for Mount Marcus Baker will be set up. Ataraxia 2012 will have to deal with temperatures around -20ºC or even below.
Sebastian Bubmann, Philip Kuchelmeister, Obadiah Jenkins, Nicolas Chibac, Tom Fredericks, Steve Carr, Pete Lowney and Marvin Ogger are taking with them 8kg of cheese, 300 oat meals, 120 bagles, 300m of ropes, camera equipment, SAT phone, 15 kites, speedwings, paragliders, skis and a lot of mountaineering equipment.
VIA Surfer Today