Preparation to the Championship of the Europe has Started!

On December 3-4 Russian National team in Ice and Snow Sailing had a training session on Senezh Lake, Solnechnogorsk in line with preparation to the European Championship.

For the first time the National team had run an organized test-drive on sails, skis and iceboards and had an opportunity to choose and decide which equipment will be used for races in 2012. 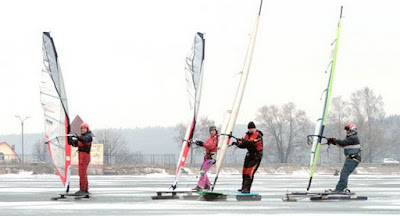 The ice was 4-5" thick, the wind was 15-20kt gusting to 30kt which made perfect conditions for the team to spend over 7 hours each day maxing out every piece of the equipment. The team included Andrei Khargovski - 2011 World Champion, Vadim Volotskoi - 2010 Champion of Russia, Shabolitov Ivan - the Bronze Master of Europe 2011, and the legendary Andrei Maslov who was one of the founders of the sport in Russia.

As the result of the test-drive it was decided that the most suitable instruments of race are the Latvian "Hiberna" ice board and the Russian twin-ski "MUST":

MUST on the ice

HIBERNA proved to be capable of running in controllable manner on an spot of the ice-rink size. The universal MUST is equally stable and fast on the hard-packed or overfrozen firn and in the deep snow. For the European race destinations with traditional black ice the best choice would be Polish design with three blades from a DN iceboat.

The team has also mangaed to test a new series of affordable sails from Neil Pryde Racing. The 5.5 sq.m sails exhibited very high speed and excellent controllability on the ice.

This kind of preparation test drives will allow Russian sportsmen to claim for higher positions in the European and World ratings as well as set the targets for the recent entrants to the competitive sport.