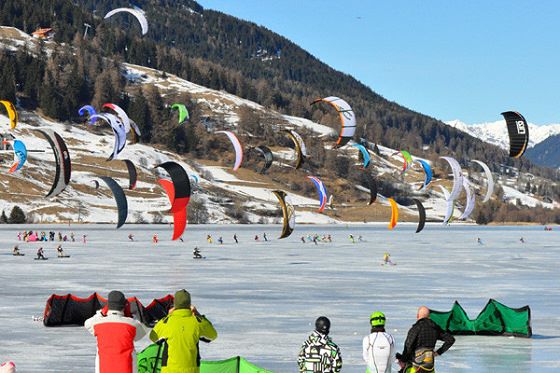 The Snowkite European Championship 2012 will kick off on the 20th January, at Reschensee, in Germany. This is the first European contest in snowkiting ever held in the old continent and it will be sanctioned by the International Snowkiting Association.
Snowkiting or snow kiteboarding is new variant of kiteboarding in winter and snowy spots. The discipline demands good wind conditions in order to jump over the rocky mountains.
Reschensee is located above 1500 metres and will welcome athletes from South Tyrol, Austria, Germany, France, Czech Republic, Russia and Scandinavia. The world's best snowkiters will battle in freestyle and race divisions.
In perfect weather conditions, snowkiteboarders can speed up to 100 km/h and jump to the skies. The Snowkite European Championship 2012 will showcase ski and snowboard kiting to crown the greatest men and women in each class.
Snowkiting is a winter sport that combines snowboarding, skiing and kiteboarding. On snow you can stand up, which means it's easier than kitesurfing. You can even start to snowkite with less wind because it uses less power and energy to kite around.
Surfer Today

Reschensee is still part of Italy, isn't it?